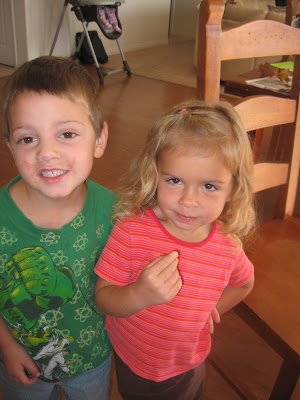 Stitch in the chocolate milk mustache and his little girl friend
(you know a girl that's a friend. :)
We have a little 4 year old in our house I have nicknamed "Stitch".  Go here if you want to know why.
Life is an adventure with this little boy!   Recently Camden (or Stitch) has been saying and doing some pretty funny things.

Just yesterday while in the van coming back from Haley's dentist appointment I told Stitch he needed to have some rest time.   Haley asked why Stitch needed rest time.  I told her that he was sounding like he didn't feel very good (he had a scratchy voice and sounded like he was coming down with a bad cold).   Stitch pipes up from the back seat...
"Ya, I have a new voice because I eat my buggers....they make me have a new voice!"

Email ThisBlogThis!Share to TwitterShare to FacebookShare to Pinterest
Labels: Camden