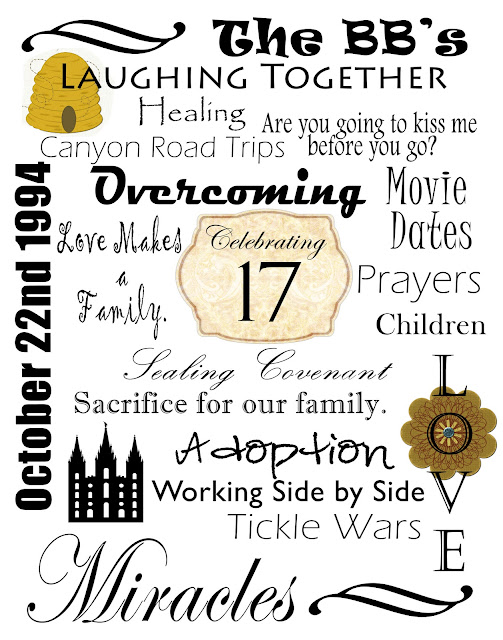 On October 22nd Brad and I celebrated our 17th wedding anniversary.
I know 17 years isn't as long as 50 or anything but it feels like a good solid number.   Brad and I were excited to go out and do something special to celebrate this milestone.   Brad planned the evening but last minute we decided to make a change of plans.   Originally Brad planned for us to eat at Tepanyaki Japanese Steak House and then head to a place in Provo to go country dancing.    After talking with me about it we decided to hit the movies rather than the dance floor but plan to try dancing on a future date.

When Brad and I met we were young adults.  Brad was working full time and I was working part time and going to school full time.   Pretty much every week and/or weekend I would head to "The Bay" (a dance club in Salt Lake City that was popular among college students) with friends and go country dancing.   I loved dancing and could do all of the flips and tricks which added to the fun!   Brad on the other hand is not into dancing so much.  :)   He had taken some ballroom lessons in high school but by the time I met him he was past that desire.  So once Brad and I started dating and we got to know one another better I realized dancing was probably not going to be part of our life together...at  least not a big part.   Brad overheard me talking about this issue recently so decided to "make it up to me" by taking me country dancing for our anniversary.   He has scored BIG POINTS thinking up this idea and making this plan even though we decided to change plans last  minute.    After eating our yummy food at Tepanyaki we were so full and glad we weren't going to be dancing.  It might not have been a good combination if you know what I mean.    We went and enjoyed the new "Three Musketeers" movie instead and loved it but most of all enjoyed our time together as a couple.

We kept things simple this year and bought smaller gifts.   I decided to try my hand at some subway art and created Brad's card.   I am going to have it printed bigger so we can frame it and hang it up in our room.

I am always amazed when I stop and look back on our marriage and all we have been through.  We have faced some pretty hard trials together and looking back we can see how they have helped us be the couple we are.    Our marriage seems to get better every year and there has been so much joy!
I am so thankful for joy!
Posted by SmallAdventures at 9:39 PM

I love your subway art! Such a good idea, I might have to copy :) Happy anniversary!