It all started on a crazy day at Lagoon.
I was taking picture of Brenley during her routine for the dance competition.


Brad and my boys were watching Brenley perform.
Then....Spencer was on the ground.


He had been standing up on the bench of the picnic table there in the pavilion.
He cried alot and wouldn't stretch out his arm.


After watching him for a bit I took him to first aid area of Lagoon where they told us it should be looked at.
After giving him an old fashioned sling and some pain meds we finished what we needed to do.  I then made a call to my sister, Diane.  She came and picked me and my little guy up and we went to Primary Children's Medical Center to get his arm checked out. 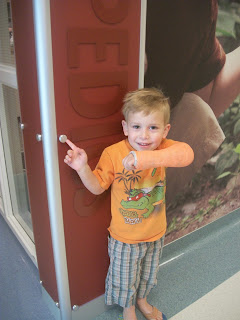 Turns out to be a fractured elbow so they put him in a good splint and a sling and told to call in the morning for an appointment with the fracture clinic.  We did and a few days later Spencer got his first (and lets hope last) cast.  He chose orange.   He thought it was pretty cool for a while but when he learned he couldn't run through the sprinklers or swim in the waddling pool he was a pretty sad guy.
This past week we got to go back to the fracture clinic and have an xray done.   He was all healed and the cast came off!


He can hardly wait to run through the sprinklers!   We are just waiting for warm enough weather.


I think this will be the week! 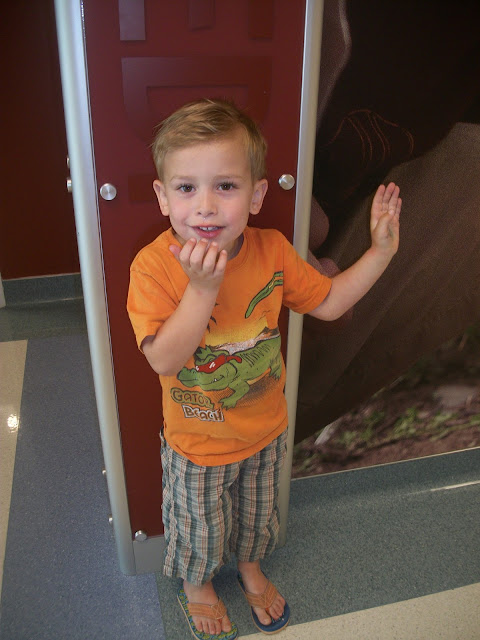 Posted by SmallAdventures at 12:00 AM

Email ThisBlogThis!Share to TwitterShare to FacebookShare to Pinterest
Labels: Spencer