My cute big Sister, Diane, has a friend who is in the middle of "de-junking" her house.  This friend had an abundance of flower arrangements and has given Diane about 5 of them.   I expressed interest in one of them and so Diane gave it to me.   When I got it home I put it up on my fridge for display.  The more I looked at it the more I didn't like it.  It needed to lose some bulk...so I gave it a little lift.  :)
Before 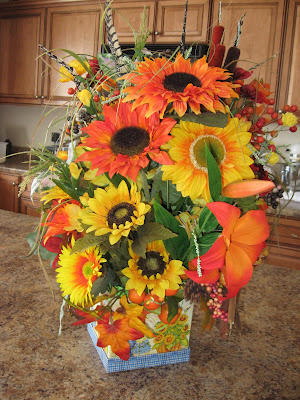 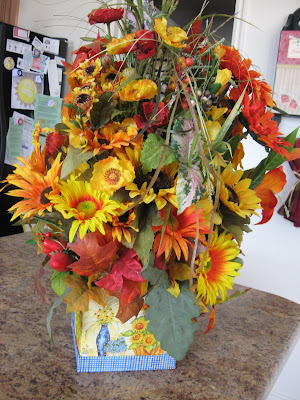 The first thing I wanted to tackle was the container the arrangement was in.  It is a square box that is cute but didn't have the colors I have in my kitchen.  I wanted to change it so it would have some red and green in it.
I pulled out the arrangement and sad it on the counter.  Then I took the lid off of the bottom and put it aside.   I then took a 12x12 sheet of scrapbook paper I had in my supplies and cut it in half and then glued it to the box in two pieces.  I wrapped it from the middle of one side to the middle of the other so the seams wouldn't show as much. 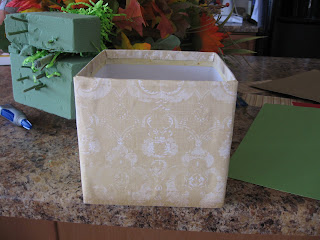 At this point I wasn't sure what else I wanted to add to the box so I decided to put the arrangement back into the box and begin working on giving it a face lift. 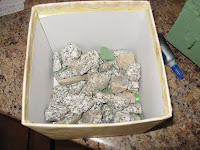 I have never done any real arranging so I didn't realize this is what you could do to help it not tip over....nifty idea!
After placing the arrangement back in the box I started to pull out the fall -ish looking leaves and the majority of the green fountain grass.  I played around with the placement of the flowers until I got it the way I liked it.  I then added some eucalyptus stems.  Once I got the look I was hoping for I went back to the box to finish it.  I ended up wrapping some black ribbon around the middle and then placing a square of red card stock in the middle. 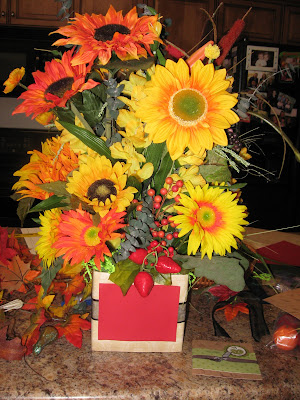 Then I took the front of this card 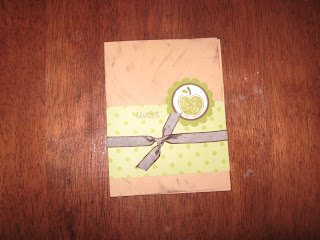 and trimmed into into a square and placed it on the red card stock.
In the end it looked like this. 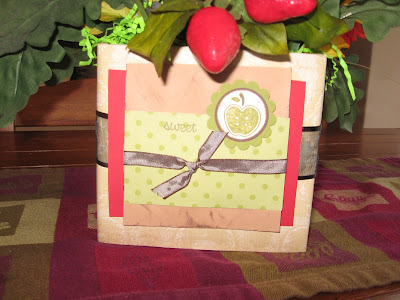 In the end I loved the new look of the arrangement, it brings a cheerful feeling to the room. 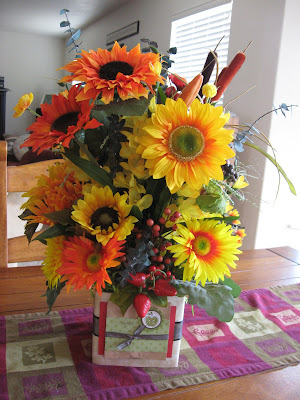 I enjoy taking something that already exists and making it look fresh and new.
These type of projects don't cost money (or cost very little) and they give me a sense of empowerment and
fresh courage to keep trying new things.
********************
Creating with my Kids
Some days my kids are restless.
Ok most days my kids have restless moments.   I keep trying to find new things they can enjoy and have fun doing together.  One afternoon we decided to make homemade play dough. We used this recipe.
It was easy and the kids loved watching it come together.   When it came time to add color we discovered our supply of food coloring was almost gone so they started adding the last couple of drops of a few colors.  In the end the play dough looked the the color of Shrek.   They loved this and began making Shrek ears or other Shrek body parts.   They sat and played with their "Shrek Goo" for over an hour.  But best of all they sang praises to me for being such a great Mom.  LOL  I love it when my kids give me a pat on the back! :) 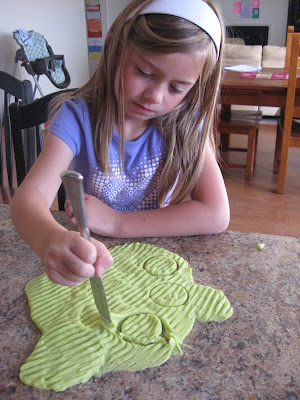 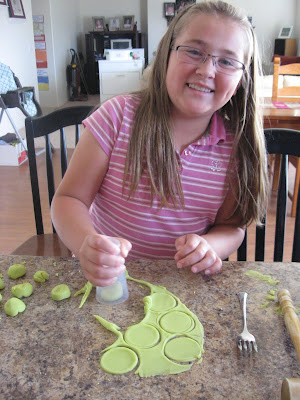 Posted by SmallAdventures at 1:21 AM

Email ThisBlogThis!Share to TwitterShare to FacebookShare to Pinterest
Labels: create