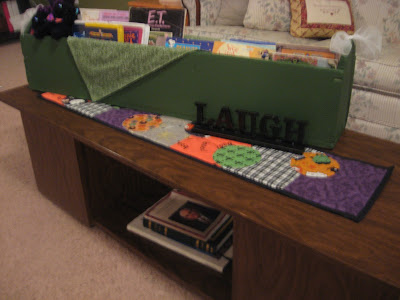 In September I shared a few of my favorite Autumn decorations.  One of them was a new table runner I had just made.   Last Friday at sewing class I decided to make another runner based on the same idea as the first.
The first one I made with a pattern called "On the Dot" by Pieces From My Heart.  I found it at Material Girls Quilt Shop.  I wanted to make a Halloween table runner and when I saw this pattern I thought it would make a great one!   I purchased a  Charm pack created by designer Riley Blake.   The runner came together easily.  The hardest part was the machine quilting in swirls.  I have never done any machine quilting so it was a new adventure but the end result was so cute...the mistakes I made gave the runner even more personality!  Here is the first runner.... 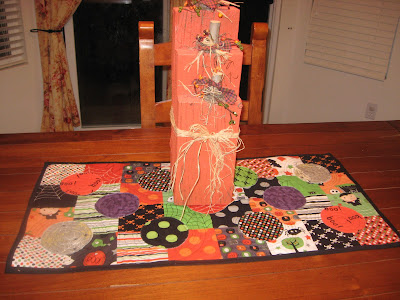 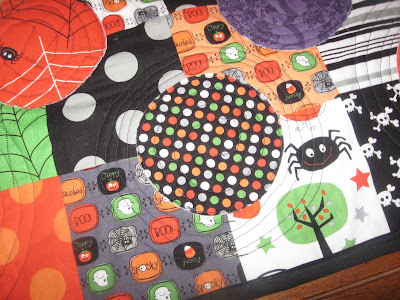 For the second runner I used some left of charm squares and seven 8x10  pieces cut out from some fat squares I purchased at Material Girls Quilt Shop and some fabric I had at home.   I wanted this runner to be a little longer and thinner. 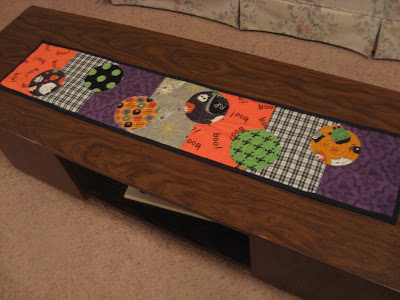 Instead of doing swirls in and outside of the circles I just did them on the border and inside the circles.

I have become very addicted to sewing....the more I do the more I love it!
If you are in  or near the SL valley you should head over to Material Girls!!  It is so fun with so many great projects just waiting to be discovered by the beginning and advanced sewing addict!
Posted by SmallAdventures at 12:00 AM

Email ThisBlogThis!Share to TwitterShare to FacebookShare to Pinterest
Labels: create