Our Adventures with Ensign Magazine. 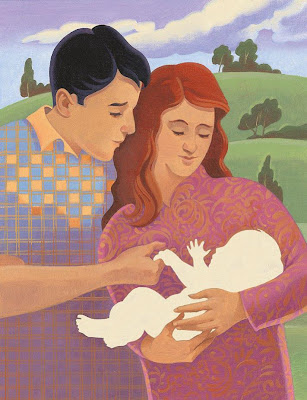 In 2009 Brad and I had the opportunity to be interviewed by an amazing person named Melissa Merrill who is an Editor for the Ensign magazine.  We had a great time talking with her and it was a very fun experience. Three other couples that we served with on the Families Supporting Adoption National Board were also interviewed.   All incredible couples who we love!

We were told it would be in the 2010 February Ensign.  When February came and the article wasn't included we thought maybe it wasn't going to be used.   We were surprised to find out months later that it was still going to be published but they wanted to come and take pictures of each of the families they interviewed.   So over Christmas break Brandon Flint came and brought his stylist to our home.   They were both great.  The stylist re-dressed us...even going into our closets to find the right shirts.   Since the article was being published in the April edition they wanted us to look a little more "springy".   It was a rather funny experience and lots of fun!
My kids had some good laughs and it is now another great memory for our family to look back on.

You can read the article by going here.
The article is very well written and I love what each couple had to say!   I hope it helps others who are finding themselves in the same place we all found ourselves in....the beginning of an difficult but incredible journey!
Thank You Melissa for this article!!!!
You are amazing!!!
Posted by SmallAdventures at 11:00 AM

Email ThisBlogThis!Share to TwitterShare to FacebookShare to Pinterest
Labels: Horrocks Family in the Media

They did a great job. What a blessing for others that are going through this that your family and these other families were willing to share their stories. Thank you. It helps me understand just a little more.

I have been following your blog for a couple years now. I was so excited to see your cute family in the Ensign. I loved the inspiring message that you and the other couples shared. Thank you!