While Brad and I served on the Family Supporting Adoption National Board we started a small blog that we hoped to fill with success stories of couples whose adoptions happened after using extra efforts...called "finding".   The blog is kind of dead these days but I have been thinking about "finding" and how important the concept was to creating our family.   Today I want to share with you a brief version of our adoption stories pointing out the "finding" we did as we tried to adopt each time.  You will notice there are no words like "Facebook" or "Social Media"...that is because those things were either not in existence or just starting when we were working on agency adoptions.  I know this ages me and all, but I do remember life without Facebook. ;).   I marvel at what can be done today to help spread the news when a couple is hoping to adopt.   There are so many more ways a potential Birth Parent can find just the right couple for her.  And I also see how the one-on-one in-person connection with another is even more important than ever.   My hope is that this post helps someone out there.  Maybe just to give hope, maybe ideas or maybe just a reminder that miracles happen....and they do! 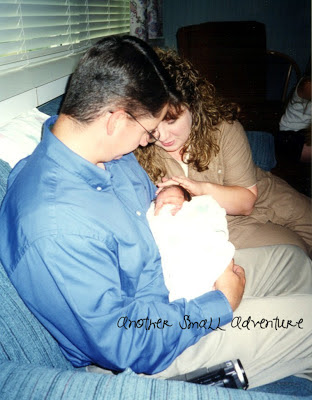 We were approved in 1998. During our classes we were introduced to what was then a new idea…designated adoption. We were encouraged to tell everyone we knew about our hopes to adopt and how they could help. We did just that. We also got involved in FSA and while serving as Co-Secretaries for our chapter we created friendships with many chapters members. We spoke to everyone in our families and shared our hopes with people at work and in our wards. We took every opportunity to talk about our hopes for a family. We also did outreach presentations and anything else that would help us meet people. In December of 1999 we were chosen by a Birth Mother. Our joy turned to sorrow as she decided to parent after much pressure from her family. A short time later one of our FSA friends asked us if it was ok to share our information with someone her uncle knew who was pregnant and looking to place. We of course said yes. In May of 2000 this birth mother went into LDS FS and ended up choosing us. Our daughter was placed in our arms in July of 2000. We know that following the prompting to serve in FSA was inspired and it was the key to getting our information to the Birth Mother the Lord had in mind for us! 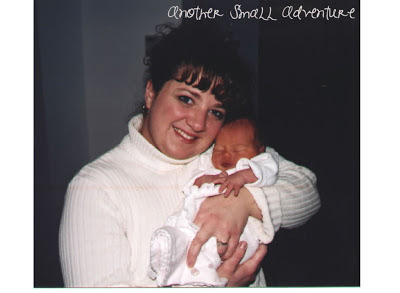 We were approved in September of 2001. Because of our first adoption we knew that being involved and spreading the word were important in our journey to a second child. In February 2002 we put our profile on hopetoadopt.com (at this time LDS FS didn't have a website for profiles) and then sent an email out to all of our family and friends letting them know our desire to adopt another child and how they could help. We linked them to our online profile. Brad forwarded this same email to co-workers. Within a very short period of time Brad heard from one of his co-workers about a girl who was living with them and that she just found out she was pregnant. A couple of months later this girl went to LDS FS requesting us. We met with this beautiful girl and her boyfriend. They hadn’t decided to place with us or even for sure placed at all…. they just wanted to meet us to help them decide what to do. A few days later they wrote us a letter announcing they had chosen us to be parents for their baby. The Birth Mother was only about 12 weeks along so we were able to get to know them through letters and another face to face meeting during the pregnancy. Our second daughter was born on Halloween of 2002 and placed in our arms 2 days later. Once again we felt the Lord guide us in our finding efforts. The tools that were needed became available and our information got to the Birth Couple the Lord had in mind for us. 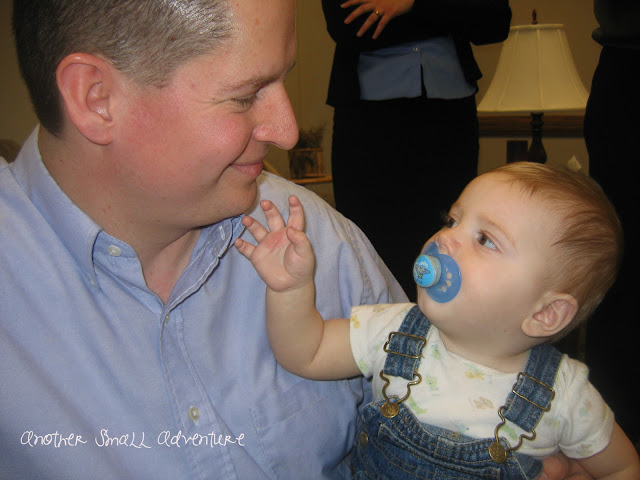 We started paperwork a year or so before getting approved. Shortly before being approved (April of 2005) we felt inspired to do what we called “Horrocks Adoption Kick-Off”. We worked with our worker to get the timing just right and held this kick-off within days of being approved and having our profile up and running on itsaboutlove.org. From our first two adoptions we knew how important it was to do all we could to get our information to everyone we knew and more. One day a favorite scripture came to mind which became our family motto during this 3rd journey to adoption. It is found in “Doctrine and Covenants 123:17
“Therefore, dearly beloved brethren, let us cheerfully do all things that lie in our power; and then may we stand still, with the utmost assurance, to see the salvation of God, and for his arm to be revealed.”
Our kick-off was very successful. We had many family, friends and ward members come to learn how they could help us. We passed out pass along cards and showed them our online profile. We invited an FSA member to come and give a brief version of the outreach presentation. Our guests left with the beginnings of a testimony of adoption. We received incredible support from all of these people and the support spread. We continued to have people ask for more pass along cards and in the end 800 + were given out to our “helpers”. We also sent our monthly email reminders and other adoption related information. We put our profile links on our signature line. We tried to spread the word every way we knew how. After months of working in this way we decided to use another tool. We went online at parentprofiles.com. We received many contacts but most of them didn’t write back or turned out to be a scam. One scammer that was particularly crafty hurts us deeply. After being on parentprofiles.com for almost 3 months we received 2 real contacts. Both were LDS girls….one was even working with LDS FS. We felt a strong connection when we got the first email from the first of these 2 girls. Her name was Samantha. We quickly sent an email to her…but it came back to us as undeliverable. We tried a few more times with no luck. We then noticed that she included her phone number so after saying a prayer for courage we called her. We spoke for only a moment and let her know we tried to email. She said she would email again. We didn’t hear from her so we tried texting her as a one last try. Weeks later she emailed again and a great friendship developed. She was undecided but seemed to be leaning toward parenting. We felt such a strong connection to her we continued contact. While this was all going on we had received contact from the second LDS girl, Talitha. She lived in another state. She decided very early on to place with us so we went through the whole pregnancy with her and drove up to her state to attend the ultrasound. We were excited. Meanwhile Samantha decided to parent but we still felt such a strong connection we thought maybe we were to be a support to her and our friendship with her grew. She went back and forth a couple more times about her decision and came up to Salt Lake to meet us. But she again decided to parent. She called us the day her baby boy was born (April 2006) and called us many times after that.

At the end of July 2006 Talitha, who had chosen us for her baby girl gave birth and decided to parent. Samantha was one of the first to call and offer support. She continued to call and we would chat often. In December of 2006 she called again only this time it was a different type of phone call. After parenting for almost 8 months Samantha felt that her little boy was meant for our family. Six days later, December 17th Sam placed her son in our arms.

Our 3rd adoption was a long trying journey but once again the Lord guided us as we moved forward and did all we could….then He stepped in and did the rest.
You can read more about our 3rd adoption here. 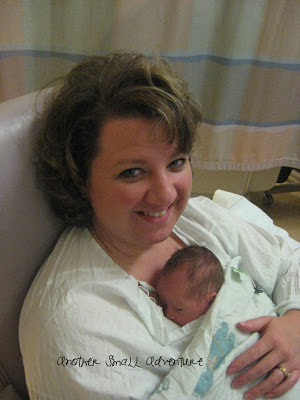 Sometime while trying to adopt for a 3rd time I heard a song called "Do you have a little love to share?".  It was about being a foster parent.  Brad and I both felt we could never be foster parents because we didn't want to have to say goodbye to a child we grew to love.   But somehow this song changed me in the deep places of my heart.  I felt this was something I not only wanted to do be needed to do.   I had Brad listen to the song as well...it touched him too but we were still on the fence.   Then one day we received a letter in the mail from one of the caseworkers at LDS Family Services inviting us to be part of a class about Foster Care. We felt prompted to take the class...take all the classes.  Sometime after we adopted Camden we were finally licensed to foster.   After 7 children coming into our lives and then leaving again. (Read about our experience with one of our Foster Babies here.) we received a phone call about a baby boy that had just been born.  His Birth Mother wanted to place him to give him a better life than she had.   The day after the phone call we got to go into the NICU and be with our new baby boy everyday for 3 weeks and then we brought him home.   Brad and I wouldn't have Spencer with us if we hadn't gone out of our comfort zone and done something we were nervous about doing.   If we had not been fostering at that time Spencer would not be in our home today.

Sometimes for our dreams to be fulfilled we have to step up, step out and move forward in the darkness for a while.   We have to follow feelings that come into our heart and we have to open our mouths and let others know what we are hoping for.  So many people are willing to help us in our efforts but we have to share our hopes with them.   Sometimes we have to go out of our comfort zone because wherever we need to be, may be the place our future Birth Mother feels the most comfortable.
Be open to trying new things, new agencies, new whatever you feel prompted to do.
Be outspoken about your hopes and what you are trying to do and let others know how they can help.
And don't let fear rule your decisions.

Your life can change in a single day.
Hang on...the darkness will clear and you will feel the warmth of light come upon you and understanding will  rest upon your heart.
Miracles are coming!


Note:
If you would like some helps on "Cheerfully doing" (aka finding) feel free to download the Someone's Missing booklet.
Brad and I helped write this booklet and the story at the beginning is ours.
Wanting to do an Adoption Kick-Off here is a peek at the outline we used to put it on.
Want more ideas go to this blog.

Posted by SmallAdventures at 12:00 AM